Review of the National Center for Digitization 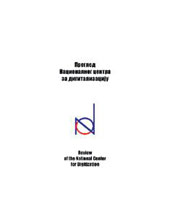 Abstract
In this paper we present some of the findings of our research “Research and documentation of railway heritage on the railway Mala Krsna - Majdanpek". The Mala Krsna - Majdanek railway established the shortest rail link between eastern Serbia, Belgrade and further north. It was built from 1920 to 1958. Since the opening to traffic, there has been no significant reconstruction or modernisation. The main improvement was the replacement of steam engines with diesel engines.The change in traffic trends has greatly reduced the share of this railway in public transport. That is why, in the last decades, some of the railway infrastructure and facilities have been abandoned and remained unprotected. As a result of the above circumstances and future modernisation, it is possible that the old railway facilities and technical infrastructure may disappear permanently.By following the railway, the objective of the project was to identify and document the existing railway heritage, which may be more than 100 years old. The results of the projects can launch and support further research. Finally, the authentic discoveries of today's issues are an urgent call to protect and permanently preserve the existing historical and cultural values of our railway artefacts.

Abstract
Selection of sustainable format is essential for long term preservation of digital content. Sustainability factors are known and compliance of formats with those criteria can be assessed with help of abundant resources. There is a considerable consensus on criteria, yet approaches to format evaluation vary amongst institutions. In this article we present discussion of the topic and our approach to such selection. We also propose the evaluation matrix, intended to make the selection process in our library more standardized.

FORCED CHILD LABOR AND THE ART OF LIVING

Abstract
The issue of child labor in Serbia, in addition to legislative acts, is determined by the child's status in society, which is best seen in the field of history of schooling and education. Namely, during the 19th century until the beginning of the First World War in Serbia, child labor was not legally regulated. Since families, especially in the villages, lived in a community, children's participation in domestic affairs was inevitable. Along with adults, children learned and matured, acquired basic practical knowledge, and became equal members of society by fitting into everyday life. Although children often did demanding physical work, the emotional relationship between children and adults was based on respect, obedience, and trust.
On the other hand, during the second half of the 19th century, when crafts in Serbia began to develop intensively, apprentices appeared in society. These were boys, mostly from low-income families, with or without completed primary school and about ten years old, who learned a specific craft from a master. The master provided them an apartment, food, and clothes, and in return, they had to do everything, even the most difficult, household chores. The apprentices usually stayed with the master for three or four years, during which time they mastered the craft and became journeymen.
In practice, however, it was not easy to be an apprentice. During the first year, the apprentices brought water to the journeymen, cleaned their shoes, were ridiculed and humiliated, while the master demanded absolute obedience from them. It was often heard that the apprentices were hungry, poorly trained, ill, and physically abused. As these were mostly children from poor backgrounds, they did not support their families. The exploitation of child labor accompanied physical and psychological abuse. This situation lasted until the end of the 19th century when the first craft school in Belgrade was opened at the House of the Society for Helping and Educating Abandoned Children. Although the Law on Craft Schools has been in force since 1892, one gets the impression that society continued to exploit children's free labor because children without parental care were forced to decide to study a trade that would enable them to live independently the fastest.
After the First World War and in the second half of the 20th century, more attention was paid to children's social status, so the exploitation of child labor was reduced. Even in this period, although there were craft boarding schools, the memories of some apprentices who still did the most challenging jobs and lived in terrible conditions were noted.
This paper aims to point out the genesis of child forced labor, its connection with social events, and its causal relations related to the development of education and culture. By analyzing archival material, mostly recorded memories, and reading relevant published sources, using the historical method, we will shed light on another segment of the permanent development of social protection of children as well as schooling and education among Serbs.

WAR MUSEUM OF NIŠ UNDER THE OPEN SKY

Abstract
This paper shows the usage of information technologies for the improvement of a guided tour through historical war monuments of Niš city. This idea titled The War Museum of Niš Under the Open Sky is realized in the open public spaces such as squares and parks in Niš located in the wider city center. For this purpose, two approaches are used to offer a possibility of getting more detailed information about the persons or events to which monuments are devoted. The first approach is realized as a mobile application that can be freely downloaded from the mobile markets such as Google Play and App Store. Upon downloading the application, the visitor has access to all necessary information about monuments on his mobile device. This enables the visitor to inform himself in advance while using Wi-Fi, as well as store the information after the visit. Another solution is realized as a web application that enables the fast display of information at the monument location. This is realized by scanning a QR code that is the part of specially designed plates located in the front of the monument or at a suitable position nearby.